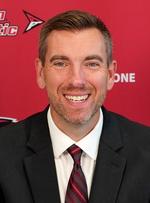 On May 4, 2012, Ryan Kane was named the 26th head coach in the history of the Ripon College men's basketball program. In addition to his coaching duties, Kane is also in his second year as Director of Athletics at Ripon College.

In his eight seasons as head coach, Kane has led Ripon to a 131-69 overall record, which includes an 102-46 Midwest Conference record. The Red Hawks have appeared in the four-team MWC Tournament in seven of Kane's eight seasons, winning the Tournament in 2017 and 2020, advancing to the NCAA Tournament in both years.

The Red Hawks have won at least 15 games in seven consecutive seasons. They have compiled a 62-23 home record during Kane's tenure, making Weiske Gymnasium one of the toughest places to play in the MWC.

A native of Green Bay, Wis. and a Pulaski High School product, Kane came to Ripon after spending four years as the top assistant coach at Loras College in Dubuque, Iowa, where he coordinated all aspects of the recruiting process and was instrumental in the development of seven All-Conference selections and one All-Region performer. Prior to his time at Loras, Kane spent one year as an assistant coach at MWC-rival Lawrence University and a five-year stint at Dominican University in River Forest, Ill., while also coaching one year at Ashwaubenon High School.

Kane is a 1999 graduate of St. Norbert College, where he earned a B.A. in Communications with a minor in Leadership Studies, while participating on the Green Knights' basketball and golf teams. As a senior, Kane earned the basketball team's Most Improved Player award, as part of a St. Norbert team that recorded their highest win total in 17 years. Kane was also a four-year member and two-year captain on the golf team, helping the team win four MWC North Division championships. Kane went on to receive his Master's Degree in Sports Administration from Valparaiso University in 2007.

An NCAA Regional Advisory Council representative for the Midwest Conference, Kane also serves as a member of the Bevo Francis Award Committee and is a Certified Trainer for Impact Basketball Academy.

Kane and his wife Paige currently reside in Ripon with their three daughters. 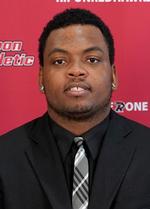 A 2019 graduate of West Virginia University, Diallo earned his bachelor’s degree in Multidisciplinary Studies with a focus in Athletic Coaching, Sports and Exercise Psychology and Public Relations.

After playing two years of NAIA basketball at York College and Simpson University, Diallo transferred to WVU for his last two years of college to finish his degree.

Diallo is a native of Los Angeles,Calif. and has worked at multiple college basketball camps, some of which includes UCLA, BYU and Loyola Marymount University. Diallo has also worked the Snow Valley Basketball Camp in Iowa.

Ty Ketz is in his first year as an assistant coach for Ripon's Men's Basketball Team.

A two-time Academic All-Conference performer, Ketz currently holds the school record for career free throw percentage (.871), while also holding the single season record (.914 in 2015-16). He finished his college career with 974 points (11 points per game), while also averaging 2.5 rebounds and 2.5 assists per contest. He shot 39 percent in his career from 3-point range, making 142 shots from beyond the arc.